Message from the Superintendent 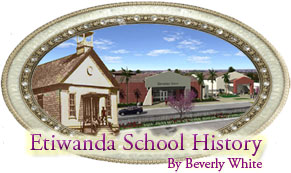 Within one year of its establishment, the new Etiwanda Colony was growing by leaps and bounds with many new settlers arriving from the Midwest and eastern states. Lured by the advertising campaigns extolling the virtues of the Golden Land, they came to purchase land for the price of $100 to $150 per acre with a guaranteed water share for each acre of ground. This new and novel approach for delivering water gave added assurance that the new settlement would survive and grow. It made the old system of riparian rights (those who lived closest to the water source got more water) obsolete and undesirable.

The Chaffeys were moving along in establishing amenities for their community. They built the Etiwanda Hotel at a cost of $6,000 and by January of 1883, it was ready for occupancy. It was built in the southwestern style, in the shape of a “U” with a central patio. There were porches on the front and sides where guests could sit and enjoy the evening breeze. The overhang also provided shade and helped cool the interior. The hotel building fell into disrepair and was torn down many years ago, however, it was located on the north side of Langham Street, now Miller Avenue, three lots west of East Avenue. The hotel was one of two sites in town to later have a telephone which was set up in June 1883. The other was the Chaffey home in the north end of the Colony. 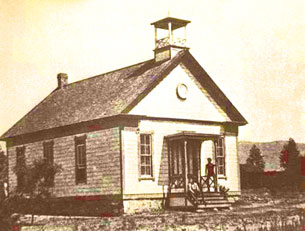 Realizing that their best course for attracting permanent settlers to their new Etiwanda Colony would be to meet the educational needs of the settlers’ children, George and William Chaffey decided to set aside land for a school building. They did this and proceeded to build a one-room schoolhouse at the southwest intersection of what is now Baseline and East avenues. Their cost for the new building was reported to be $1,200. Until the time of the 15 Freeway, there were tall palm trees marking the site. Now, it would be approximately where the park and ride lot is situated. The schoolhouse became the location for community meetings and Sunday church services. This and succeeding school buildings all became rallying points for community functions and held this position for many years.

It was reported in the Riverside Press and Horticulturist newspaper on February 3, 1883, that the new Etiwanda schoolhouse was one of the neatest in Southern California. Building being almost completed it would soon be ready for occupancy. Now that the Etiwanda Colony had enough children living in the area, it was urged that they petition for a separate school district to be known as Etiwanda.

Since Etiwanda was quite a distance from larger cities, residents became their own source of entertainment with musical evenings and community plays. The first such community social concert was held on Thursday, April 12, 1883, in the new Etiwanda Hotel and reported upon in the Riverside Press and Horticulturalist newspaper on the following Saturday. It was held for the benefit of the organ fund for the new settlement. There were addresses, songs with several solos, and three readings of famous works. This concert made people aware that the new settlement contained a large number of talented people. At the close of the program, Mr. L. M. Holt, editor of the Riverside newspaper and close friend of the Chaffeys, indicated that the object of the community concert was to raise funds to purchase an organ for the use of the settlement and which was to be kept in the schoolhouse. A collection was taken and $78.40 was raised. There was an announcement of a second concert to be held the following week in the new schoolhouse. 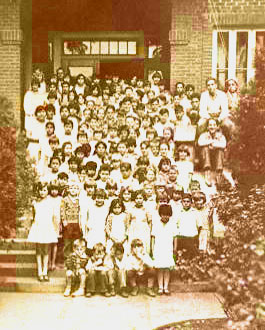 As announced, the second Etiwanda Concert was held on Tuesday, April 17, in the newly completed schoolhouse. This was the first time it was occupied. There was another collection taken for the organ fund and in all $128.80 was collected at both concerts. This was enough to purchase a new organ for $125 at a discounted price. (It was noted that the dealer gave a $35 discount for the good of the cause.) The organ was to stay in the schoolhouse and be used for both school functions and church services on Sundays. To show the growth of the community, the same newspaper carried a note that over 600 acres of land was placed under cultivation in Etiwanda during that current season of 1883.

At the time of the second concert in April 1883, the Chaffey Brothers brought down a steam-powered generator which provided two electric lights, one in the front of the building and one in the schoolroom. This provided abundant light for the gathering.

On May 12, 1883, the County Board of Supervisors granted the petition for Etiwanda School District, and it was established with a three-man board of trustees.

By June 30, 1885, the Riverside Daily Press reported that the San Bernardino County Superintendent of Schools had apportioned $5,372 per pupil in the county school fund. Etiwanda had a reported average daily attendance of twenty-two students and Perdew school had fourteen.

The small one-room wooden schoolhouse at Baseline and East avenues was adequate for a time, until there was sufficient growth to require two teachers. In 1890, land was purchased at the intersection of Etiwanda and Victoria avenues. During this year, a large wooden schoolhouse was constructed. The community organ was moved to the new location. Older community members stated during interviews in 1976 that they remembered the organ and knew of students who were given lessons in its use. 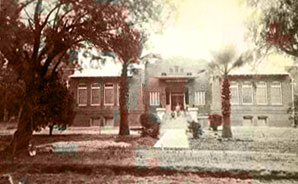 In addition to the one large room which could be divided into two, the new schoolhouse had a bell tower and a cloak room where students stored their lunches and coats. This room also contained the table holding a communal water bucket and dipper which served as the drinking fountain. One of the children was selected to monitor and keep this bucket filled with fresh water obtained from the stone and cement reservoir situated on the northwest corner of the property. This reservoir was filled twice a month as the allotment for this property just as it was for the landowners in the area. Water to the reservoirs was directed through underground cement pipes.

In 1912, the number of families with young children continued to grow and the community needed a larger schoolhouse. So, a four-room, two-level brick building was constructed on the same site at Etiwanda and Victoria avenues. The wood from the first wooden schoolhouse at this site was purchased by a local community member who used it to build a large home that still stands on the southeast corner of East and Victoria avenues one lot from the corner.

Etiwanda students were very sports-minded even in those early days. They had both a girls’ and boys’ basketball team in 1914 and by 1927 a boys' tackle football team played in a grain field east of town. 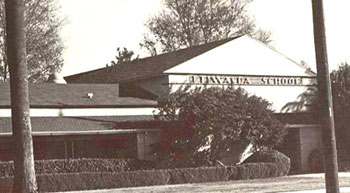 By 1938, the community continued to grow and more student housing became necessary. The Long Beach earthquake of this time also sparked interest in state school buildings and the new code required safer school construction, thus, the third building on this site was constructed. It now serves as the core of the current Etiwanda Intermediate School. Bricks from the demolished brick building were used by the W.P.A. to construct walls and fences. A portion of the original brick wall is visible in the front hallway near the auditorium entrance. A new brick façade was added in 1996 but a section was left open so we can still see and touch the original bricks from the 1912 school house.

Etiwanda continued to grow and currently has 13 elementary schools and four intermediate schools, serving over 13,000 students. The rich history of the Etiwanda school system and the value of education have always played an important part in this community.